The initiative was first discussed at the chapter’s executive committee retreat as a yearlong series on climate change using local experts and guest speakers. However, the leadership decided the one-hour pop-up lectures would be a great way to spark conversation about current issues in a much more timely and nimble way.

“We also thought this was a good way to have potential initiates get an idea of what Phi Kappa Phi is all about. I start each program with a very short Phi Kappa Phi plug,” said Chris Buddo, chapter president. 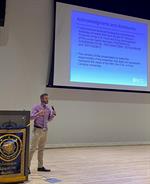 The first event on Sept. 26 was titled “Is War with Iran Inevitable?” and presented as a panel discussion with faculty from the ECU Department of Political Science. The presenters encouraged their classes to attend and the room, which seated approximately 75 people, was nearly full.

The second presentation on Nov. 20, titled “Vaping: Current Research,” provided a history of vaping and various aspects of the subject. The 200-seat theater was also full, given the current popularity of the topic.

Chapter 246 at Middle Tennessee State University in Murfreesboro, Tennessee, sponsored a shift for the university's Habitat for Humanity build on Nov. 8.

Six members, including two student vice presidents, went to the site and assisted with various tasks to aid in the construction of the house Habitat for Humanity was building. 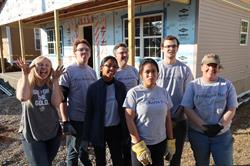 “We hope our participation in this build will foster community in our Phi Kappa Phi chapter by having our members work together to accomplish a goal and display our devotion to serving our community,” said Chapter President Dr. Philip Phillips.

Top photo by Lacey Gray – Panelists from the Iran presentation included, from left, Dr. Alethia Cook, chair of the department of political science; Dr. Hanna Kassab, instructor; and Dr. Armin Krishnan, director of security studies, who moderated the panel and explained the various players in the region.