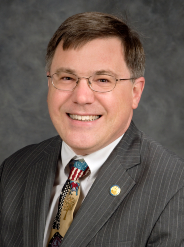 Dr. John R. Vile, dean of the Honors College at Middle Tennessee State University, is the 2020-2022 recipient of the Phi Kappa Phi Scholar Award. Dr. Vile received the award for his excellence in teaching, research and public service.

Dr. Vile has made significant contributions to scholarship in the field of political science, spanning his 40-year career. He has contributed broadly to governmental, political, and historical literature by authoring more than 25 books, editing or co-editing 15 books, and numerous chapters and peer-reviewed publications. In addition, Dr. Vile is frequently consulted by media on political issues due to his recognized expertise.

“The Phi Kappa Phi Scholar Award affirms John Vile as a model of the teacher-scholar, as evidenced by his distinguished and highly productive academic career and long service to the academy,” said Society Executive Director Dr. Mary Todd.

In addition to being a dean and professor, Dr. Vile continues to honor the advancement of learning with his most recent years being the most productive in his career. Aside from the aforementioned publications, in the last five years he has authored five encyclopedias, two of which are published and three pending publication, on the American flag, the Declaration of Independence, the Liberty Bell, the national anthem, and the Bible in American law and politics

Extending beyond his leadership, Dr. Vile has received several honors including the MTSU Outstanding Career Achievement Award, the MTSU Distinguished Service Award, the Congressman Neal Smith Award for contributions to law-related education, and induction into the American Mock Trial Association Hall of Fame.

Off campus, Dr. Vile proves to be a leader in his community, pastoring and serving his local church of almost 20 years, teaching Sunday School and leading a Bible study for immigrants. Recently, he was recognized for his service as the statewide recipient of the Harold Love Award for Public Service.

Dr. Vile received his doctorate at the University of Virginia in 1977.