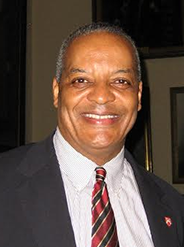 
Dr. David L. Briscoe, professor in the Department of Sociology and Anthropology at the University of Arkansas at Little Rock, has been chosen by The Honor Society of Phi Kappa Phi—the nation’s oldest and most selective all-discipline collegiate honor society—as the 2018-2020 recipient of the Ray Sylvester Distinguished Service Award. Dr. Briscoe received the award for his outstanding dedication to service extending beyond academia.

A certified family life educator and marriage and family sociologist, Dr. Briscoe’s professional and academic career spans more than 25 years. In addition to his leadership and achievement as a scholar, he has made a substantial impact through volunteer service to the Boy Scouts of America for more than 50 years. Dr. Briscoe has served in several roles within the Boy Scouts organization spanning all levels including district, council, area, regional, national and international.

Dr. Briscoe, who is currently serving as president of the Quapaw Area Council in Little Rock, Arkansas, has been recognized for his service with the Boy Scouts of America through a number of awards including the organization’s highest honor, the Silver Buffalo Award for distinguished service to youth on a national basis—an honor he shares with 15 United States presidents. Dr. Briscoe also received the Distinguished Eagle Scout Award in 2008 for notable service and achievement in his profession and to the community for more than 25 years after attaining the level of Eagle Scout.

“Dr. David Briscoe has demonstrated a consistently remarkable and meritorious commitment to volunteer service. For 52 years, Dr. Briscoe has dedicated his time, goodwill and public spirit to serving youth in the Boy Scouts of America in a variety of roles, directly and indirectly impacting the lives of an estimated 5 million youths and adults over the course of his involvement with the organization,” said Dr. Joseph W. Wescott, chair of the Distinguished Service Award selection committee. “Dr. Briscoe’s sustained volunteer service to youth beyond the realm of academia is emblematic of the spirit of Phi Kappa Phi’s Ray Sylvester Distinguished Service Award.”

A recognized leader on campus, Dr. Briscoe has taught at the University of Arkansas at Little Rock for more than 25 years. He is the first African American male in the university’s history to attain full professorship. Dr. Briscoe has been recognized with numerous awards for his academic service and teaching including the 2003 Distinguished Alumnus Award and 2008 Distinguished Service Award from Southern Illinois University at Carbondale. He was also named the inaugural University of Arkansas at Little Rock Distinguished Teaching Fellow in 2009.

Dr. Briscoe holds a Ph.D. in sociology from Southern Illinois University at Carbondale.

Named in memory of President-Elect Dr. H. Ray Sylvester, the Ray Sylvester Phi Kappa Phi Distinguished Service Award honors an individual who has provided sustained, non-compensated volunteer service to others beyond the realm of academia. The award was established in 2013 and is given once every two years. Recipients receive a $1,000 honorarium, life membership and recognition citation. Dr. Briscoe will accept the award on August 3 at the Society’s biennial convention in Minneapolis.