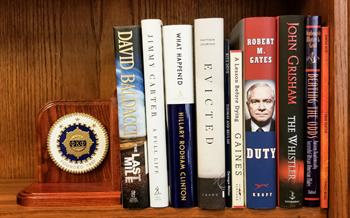 It’s National Book Lovers Day! Are you looking for your next great read? The Honor Society of Phi Kappa Phi is proud to have a long history of published members. Whether you’re in the mood for a suspenseful mystery or inspiring poetry, these highlights from Society authors are sure to provide something for everyone.

Brené Brown (University of Houston) – The research professor from UH holds the title of having one of the most watched Ted Talks in history. The Power of Vulnerability has accumulated more than 40 million views. Her 2018 release, Dare to Lead, continues her study of courage, vulnerability and empathy.

James Lee Burke (University of Louisiana at Lafayette) – Burke, a Pulitzer Prize nominee, is best known for his Dave Robicheaux mystery series, two of which made it to the big screen. (Heaven’s Prisoners in 1996 and In the Electric Mist in 2009.) The latest Robicheaux installment, released earlier this year, is The New Iberia Blues.

Jimmy Carter (Georgia State University) – Even before his presidency, Carter was a published author and has written more than 30 books. The topics range from politics to memoirs and poetry. In his latest book, Faith: A Journey for All, he looks at how faith has sustained him and how readers might find it in their own lives.

Hillary Rodham Clinton (University of Arkansas at Little Rock) – Her first book, It Takes a Village, not only spent time at the top of the New York Times Best Seller List but also earned the first lady a Grammy Award for Best Spoken Word Album for the audio recording. In her newest release, What Happened, she shares her perspective of the 2016 presidential election.

Matthew Desmond (Arizona State University) – Desmond is the is the Maurice P. During Professor of Sociology at Princeton University. His most recent book, Evicted: Poverty and Profit in the American City, continues his research on poverty in America. It also earned him the Pulitzer Prize.

Rita Dove (Miami University) – Though Dove has published a novel, a short story collection and more, she is best known for her poetry and has served as Poet Laureate Consultant in Poetry to the Library of Congress. Her poetry collection Thomas and Beulah won the Pulitzer Prize for Poetry.

Ernest Gaines (University of Louisiana at Lafayette) – One of Gaines’ most critically acclaimed novels, A Lesson Before Dying, won the National Book Critics Circle Award and was adapted for television. The Tragedy of Brady Sims is his latest novella and tells a story of race and power in a small town.

Robert Gates (Texas A&M University) – The former United States Secretary of Defense first published From the Shadows: The Ultimate Insider's Story of Five Presidents and How They Won the Cold War. His more recent nonfiction, A Passion for Leadership, looks at lessons from his fifty years of public service.

John Grisham (The University of Mississippi) – The lawyer turned novelist first hit the shelves with A Time to Kill in 1989. Since then, his more than 20 legal thrillers have continued to stay atop the best seller lists. His latest release is The Reckoning and his upcoming book, The Guardians, will be released in October.

Sandra Meek (Berry College) – Meek has served as the poetry editor of the Society’s Forum magazine since 2008. She is the author of several books of poems including her most recent work, An Ecology of Elsewhere. Her forthcoming book, Still, will be released in January.