A Season of Service

The next few Chapter Updates will include chapter events focused on service. This month will include highlights from three initiatives completed recently by chapters in Alabama, Florida and Kentucky who participated in the Fall Service Project. 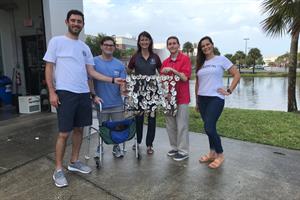 Chapter 308 at Florida Institute of Technology in Melbourne, Florida, partnered with the Indian River Lagoon Research Institute to aid in their Living Docks program.

The IRLRI is made up of engineers, scientists, contractors and students who are working and researching in the field of coastal water quality remediation and restoration. Together with local community groups they have created Living Docks, which promote the growth of filter feeders at private and public locations along the Indian River Lagoon.

Phi Kappa Phi members along with students and community members who participated in the service project learned about the detriments that humans have caused the IRL through the years and ways they can reduce their impact. In addition, participants created oyster mats out of oyster shells and mesh which were then deployed on local dock pilings in early November to propagate oyster larvae and other filter feeders that remove impurities from the water naturally.

Chapter 306 at the University of Kentucky in Lexington, Kentucky, visited Ashland Terrace Retirement Home to provide assistance with basic technology and cyber security. Ashland Terrace is a community-based, independent retirement center for older women that has met its mission by providing housing to those in need since 1849.

Ten Phi Kappa Phi members interacted with 12 women that live in the home and recorded the types of assistance provided to each resident such as setting up an iPad or learning how to block phone numbers. They also provided a pamphlet with tips on how to deal with potential scams, robocalls, mortgage scams, IRS scams, fake emails, and free or cheap product offers for medicine and electronics.

Residents were also given a six-question group quiz that included different scenarios and discussion on how to respond to each scenario in order to protect personal information. Retirement home staff also reported that participation for this program was higher than previous activities. 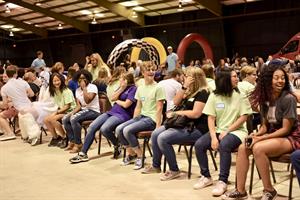 Chapter 194 at the University of South Alabama in Mobile, Alabama, collaborated with a multitude of organizations to host Mega Musical Chairs on Oct. 4.

The event was coordinated by Alpha Epsilon Delta in collaboration with Phi Kappa Phi and other project partners including Collegiate Entrepreneurs Organization, Indian Student Association, Panhellenic Sororities, IFC fraternities, NPHC sororities and more. Academic colleges and departments also participated in the event along with 20 nonprofit organizations that hosted booths with activities. Local restaurants also sold food to support the event.

The goal was to foster an environment that encourages collaboration, education and improved literacy for multiple causes. Over 450 people participated, and players were encouraged to talk to the person next to them about the cause they were representing, which included over 68 nonprofit organizations.

Organizers said moving the event from campus to The Grounds in Mobile provided more access to the community and a more than 100% increase in ticket sales (695 tickets sold). Almost $9,500 was raised for charity, and over 100 volunteers were recruited to work the event. The winner of the 2019 Mega Musical Chairs competition chose to donate the funds to the Huntsman Cancer Institute and the University of South Alabama Children’s and Women’s Hospital.