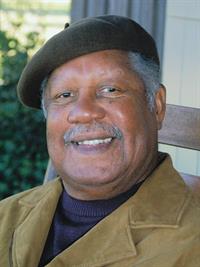 Ernest James Gaines (University of Louisiana at Lafayette), educator and award-winning author, died Nov. 5. He was 86.

Born Jan. 15, 1933, on River Lake Plantation in Pointe Coupee Parish in Louisiana, Gaines was the oldest of twelve children. His parents worked as sharecroppers on the plantation where his ancestors had once been slaves, and he, too, spent time working in the fields in his youth.

When Gaines was fifteen years old, he joined his mother and stepfather in California because there was no longer a high school for African Americans in his parish. There he attended Vallejo Junior College before serving two years in the United States Army. Upon discharge, he returned to his education by attending San Francisco State College (now University).

The short stories Gaines wrote in college garnered attention, with his first one, The Turtles, being published in the school’s magazine in 1956. He graduated with his bachelor’s degree in 1957 and continued his education at Stanford University.

Gaines’ first novel, Catherine Carmier, was published in 1964. The rewrite of a previously destroyed earlier version of the manuscript tells a love story set in the Louisiana countryside. Despite years spent living in the San Francisco area, all of Gaines’ work is set in the location he knew best – the South.

“In the beginning, I tried to be a more cosmopolitan writer, but I realized that I was a country boy and I had to deal with things I knew about and where I came from,” he once shared.

In 1981, Gaines joined the teaching staff at University of Louisiana at Lafayette and served as Writer-in-Residence. During his time there, he published A Gathering of Old Men and A Lesson Before Dying, both of which had film versions of the novels created later. The university’s chapter of Phi Kappa Phi inducted Gaines into the Society in 1984.

A Lesson Before Dying was selected by the National Endowment for the Arts as the NEA Big Read, an annual program that encouraged entire communities to read and discuss one book together. Gaines’ other honors and awards include the Louisiana Humanist of the Year, the National Humanities Medal, a MacArthur Foundation Fellowship and a nomination for a Pulitzer Prize.

State Librarian of Louisiana Rebecca Hamilton worked with Gaines as part of the Louisiana Book Festival. She shared, “He was one of the most special people we’ve ever known. He gave us his full measure of devotion each time he was with us. He was the first recipient of the Louisiana Writer Award in 2000 and each year in the House Chamber when I present this award, I call out his name. We will miss him more than we can say.”