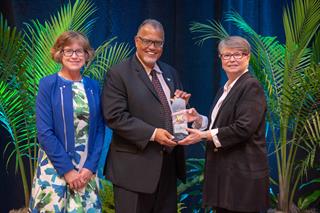 Phi Kappa Phi’s Excellence in Innovation Award is, in itself, an innovation.

The $100,000 prize was awarded for only the second time to Western Michigan University for their Seita Scholars program. Seita Scholars are students who spent time in foster care and the program is set up to help them transition from foster care to higher education.

Edward B. Montgomery, president of Western Michigan, said one of the best parts of being president is going to commencements.

“You get to see people and families who are filled with joy at what they’ve accomplished and what they’ve overcome,” Montgomery said. “If you ever get cynical about why we’re in the higher education business, sit back and watch graduation.”

The Seita program, he said, is an incredible journey for students who had no pathway forward in life. It has graduated more than 140 students, many of whom have gone on to graduate school and medical school.

J. Gabriel Ware, who Montgomery brought with him to 2018’s biennial convention, was a student in the Seita program.

“I was a horrible student in school, to be honest with you,” Ware said. He was in foster care from the time he was a year old.

Higher education never occurred to him until his girlfriend, now his wife, graduated from Western Michigan and talked about getting her masters degree.

“You can’t just go get your masters while I’m making $7 an hour as a cashier,” Ware said. He went first to community college, where one of his former case workers urged him to look into the Seita Scholars program. And, once he had that associate’s degree, he did and was accepted. That opened doors.

During community college, Ware worked two and three jobs an hour to make ends meet. With the Seita program’s financial aid, which covers everything, he could advance past entry-level retail jobs.

“When you work two to three jobs to get through school, you don’t get jobs to help advance your career,” Ware said. With Seita’s help, he could accept internships that allowed him to advance his career and even paid for part of his masters degree.

“This is a great program and I’m proud to be a part of it.”