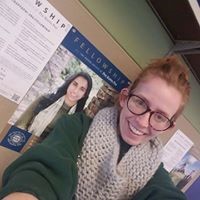 Chapter 294 at Slippery Rock University utilized social media in a fun way to spread awareness of The Honor Society of Phi Kappa Phi and its awards program.

Chapter officers and other active members posted various, large Phi Kappa Phi posters around campus and challenged students to take a selfie with or a picture of any of the Society posters. The photo contest announcement was posted on the chapter’s Facebook, Twitter and Instagram accounts with the motivation to increase the presence or exposure of the chapter during the period between when the invitations were sent out to qualifying students until a week before the initiation ceremony.

All members and newly invited students were instructed to find a poster on campus, take a selfie in front of it, and post the picture on one of Slippery Rock University’s Phi Kappa Phi social media pages. At the end of the time period, the chapter held two drawings – one from posts by current student members (faculty and staff were invited to participate but not eligible for the gift) and one from all those invited to join Phi Kappa Phi, whether they decided to accept or not.

During the contest, chapter president Laurel Patterson sent out the location of a few more of the posters with reminders to participate. She said of the visibility project, “I believe that keeping The Honor Society of Phi Kappa Phi in front of the campus community is an important way to increase awareness. It doesn’t have to be a publicized event. It can be anything that keeps the organization out there. The rest happens naturally.”

At the end of the submission period, winners were drawn from each category and they received gift cards, which were announced on the social media pages.

One of the winners was Erin O’Connor who posted her selfie on Facebook.

This is just one of many ways to get more information out to the campus! If you have ideas that have worked for you chapter and would like to share, please contact Kay White at kwhite@phikappaphi.org.