Spread the Word about Giving Tuesday 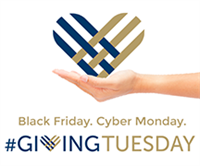 In just a few weeks, Phi Kappa Phi will celebrate Giving Tuesday—a global day of philanthropy dedicated to giving back through the support of nonprofit organizations. Now in its sixth year, Giving Tuesday will take place on November 28, the Tuesday following Black Friday and Cyber Monday.

Gifts made to the Phi Kappa Phi Foundation on this day will support Phi Kappa Phi’s award programs, which give $1.4 million each biennium to deserving students and members. These programs help students realize their educational and career goals, from study abroad to graduate school to lifelong learning.

But we need your help in spreading the word about this important day. To do so, join the Phi Kappa Phi Thunderclap campaign. It takes less than a minute!

You may be asking, what is a Thunderclap campaign?

Thunderclap is an online platform that allows people to collectively send social media posts via Twitter, Facebook and Tumblr on the same day (i.e. Giving Tuesday) at the same time to raise awareness about an organization or cause. Think of it as an online flash mob.