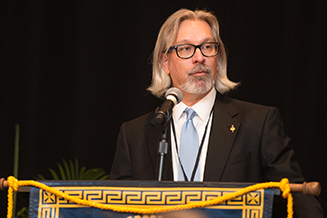 Outgoing President Timothy L. Hulsey called the state of the Society strong. “We have amassed a record endowment, we have more than 100,000 active members, and more than 300 chapters,” he said. “We remain the world’s oldest and most selective all-discipline honor society.”

And the future looks bright as well, with Gypsy Denzine assuming the gavel at the end of the convention. “We continue to work with our peers in the Honors Caucus to emphasize the value in honoring academic success, leadership, and service,” he said.

But challenges remain, Hulsey continued, noting a declining acceptance rate and struggling chapters as particular concerns. He also touched on the progress of a 2014 strategic plan to overcome these challenges.

“If we are in fact going to live by our motto and allow the love of learning to rule humanity, we all, individually and collectively, must take the time and put down our cell phones and stop using our computers and our pads, and consider not just how things are, but how they ought to be,” he said. “Now, more than any time in my memory, we are called upon to act on our beliefs. So let us band together to support our motto. Let the love of learning become apparent in our actions. Honor excellence by being excellent.”

Executive Director Mary Todd dove deep into Hulsey’s message, providing an update of what staff has been doing to raise the profile of the Society. “Since 2014, the board and staff have been focused on the implementation of those initiatives,” she said. “And we will continue to keep that focus in the coming biennium and beyond, if necessary, to ensure a sustainable future for Phi Kappa Phi.”

The Society has worked in elevate its profile and project a greater voice in higher education. The new Excellence in Innovation Award, which awards $100,000 to an institution, is a first for the Society. In addition, existing awards programs are being increased. Dissertation fellowships have grown from two to ten; fifty Study Abroad grants are now seventy-five; Love of Learning awards grew from 160 to 200. “We believe the awards programs are our signature member benefit and a compelling piece of the message,” Todd said.

Members and chapters are growing. The number of chapters now stands at 335, with six installed since the last convention. Five more will come on board by the end of the calendar year. The Society’s endowment is also healthy, funding the increase in awards as well as video and public relations campaigns to raise Phi Kappa Phi’s profile.

Todd, like Hulsey in his earlier speech, emphasized the importance of chapter health. “Please know how grateful we are for the volunteer work that you do, for the hours you put in on the maintenance of your chapter. I know that the gratitude of seeing student smiles at initiation ceremonies are worth the work we put into it,” she said. “We depend on you immensely . . . you are the source of our growth.”