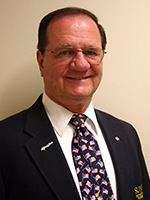 How did you become involved as a Phi Kappa Phi volunteer? Our Vice President of Academic Affairs came to our Faculty Senate and proposed establishing a chapter of Phi Kappa Phi at Alfred State College because of its multidisciplinary nature. It fits our institution. He asked who was a member of Phi Kappa Phi and I was the only one that raised his hand. At that time I became the point man for the mission to establish a chapter here. I became a member of Phi Kappa Phi while at Virginia Tech in 1977 and was a charter member of the chapter at the U.S. Military Academy at West Point in 1978. It was the first honor society established there. While there I served as the Chairman of the student selection committee and as the President of the chapter.

What has Phi Kappa Phi done that has made you proud? Phi Kappa Phi is a symbol of academic excellence. While on the faculty at the U.S. Military Academy at West Point I had the opportunity to visit another campus to view their laboratories and get ideas for West Point. The faculty member assigned as our escort did not appear to be enthusiastic about dealing with a group of uniformed Army officers. However, when I took off my coat I was wearing my Phi Kappa Phi pin as a tie tack. Upon seeing it he exclaimed, "Ah!  Phi Kappa Phi!" Through that symbol I was immediately accepted as being an intellectual equal.

What does Phi Kappa Phi mean to you? Becoming a member of Phi Kappa Phi provides a great sense of satisfaction and a feeling of accomplishment. Once earned it is an honor that becomes a part of who you are and no one can take that away from you. It is nice to be noticed.

What do you enjoy most about being a Phi Kappa Phi volunteer? A feeling of satisfaction. I firmly support the love of learning. It never stops. When given the challenge of establishing a chapter at Alfred State I readily accepted it. It was a labor of love. We have a number of excellent students and I strongly believe they should be recognized for their accomplishments.

What advice would you give to a new Phi Kappa Phi volunteer? Get involved. There is a lot of satisfaction in recognizing the accomplishment of young folks. A pat on the back for a job well done goes a long way.

What are your hobbies? Golfing, skiing and bowling.

Where are you from? Born in Steelton, Pa., up wind of Three Mile Island. I grew up a mile away in Oberlin, Pa., and attended Central Dauphin High School before entering the U.S. Military Academy at West Point.