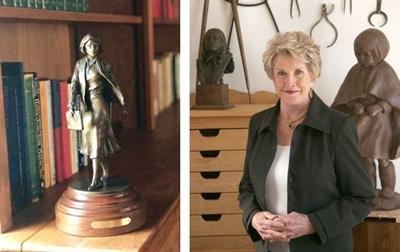 Goodacre, born Aug. 28, 1939, in Lubbock, Texas, studied at Colorado College and the Art Students League in New York. She was initiated into the Society in 1999 by Texas Tech University.

Several of her works are held on the Texas Tech campus including a 6-foot, 4-inch bronze sculpture titled The C.E.O. which was donated to coincide with her 2016 retirement as a sculptor.

Goodacre was dubbed “America’s Sculptor” and created several high-profile bronze pieces including the Vietnam Women’s Memorial in Washington, D.C.; the Irish Memorial in Philadelphia; and a statue of Ronald Reagan called After the Ride which is installed at his presidential library in Simi Valley, California.

“Big pieces are a lot of fun but a lot of work; hundreds, sometimes thousands of pounds of clay to move around. Then to see the pieces outdoors with lots of people around them is very rewarding,” she said. “If I want to realize an idea quickly, I make little pieces, and then I may or may not enlarge them.”

One smaller piece – a scale model of The C.E.O. – is on display in the board room at the Phi Kappa Phi national office in Baton Rouge, Louisiana.

When the United States $1 Coin Act of 1997 required the creation of a new dollar coin, a few select artists were invited to submit designs for the two sides coin. Goodacre’s depiction of Sacagawea – the Shoshone guide of the Lewis and Clark Expedition – was chosen for the obverse side, or front face, of the coin. It has been minted every year since 2000.

Goodacre’s honors during her lifetime include the Texas Medal of the Arts, the New Mexico Governor’s Award for Excellence in the Arts, a Lubbock street named in her honor, induction into the West Texas Hall of Fame, and honorary doctorates from Colorado College and Texas Tech University.

Harry Connick Jr., who is married to her daughter Jill Goodacre, announced her passing on his Facebook account. “Glenna was a great hero of mine,” Connick wrote. “She personified strength and resolve.”

Photos - Glenna Goodacre, right, and a scale model of The C.E.O. on display in the Phi Kappa Phi national office.