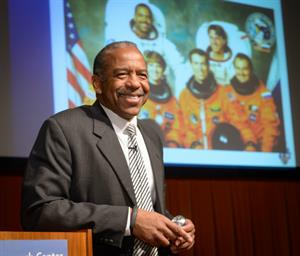 Here at The Honor Society of Phi Kappa Phi we love to celebrate the achievements of our members. In honor of Black History Month, we’re highlighting a handful of members who’ve made lasting impressions – from breaking down barriers on school campuses to flying, quite literally, among the stars.

Delores P. Aldridge (Clark Atlanta University) – Aldridge, an award-winning sociologist and civil rights activist, was the first African American woman faculty member at Emory College of Arts and Sciences. There she served as the founding director of the first Black Studies degree program in the South.

Rita Dove (Miami University) – When Dove was named U.S. Poet Laureate in 1993, she was the youngest person and first African American to be named to the position. She has received numerous awards including a Pulitzer Prize.

Marcheta P. Evans (University of Texas at San Antonio) – As the president of Bloomfield College, she is the first woman and first African American to lead the school. “It became my mission to … be in a position to apply for a presidential job,” shared Evans in an interview with the college’s radio station. “It was mainly being done because there’s a scarcity of women – and women of color – that are presidents.”

Ernest Gaines (University of Louisiana at Lafayette) – Born on a Louisiana plantation, Gaines became an award-winning author and educator. His honors include the Louisiana Humanist of the Year, the National Humanities Medal, a MacArthur Foundation Fellowship and a nomination for a Pulitzer Prize.

Wendell Gunn (University of North Alabama) – As the first African American student to integrate into UNA, Gunn eventually served on the university’s Board of Trustees. He also served as a senior advisor to President Ronald Reagan.

Bernard Harris, Jr. (University of Minnesota) – Harris, a medical doctor and pilot, was chosen to serve aboard two NASA Space Shuttle missions. In 1995, he became the first African American to perform a spacewalk.