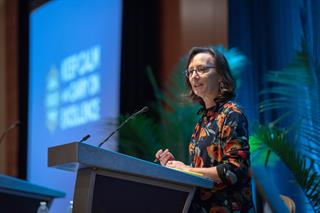 Jason Fitger is a bullish, wildly inappropriate professor of creative writing and literature at Payne University, a fictional small university enduring familiar themes to many in higher education – cuts in funding, student aid, and a resentment towards liberal arts.

He’s also the alter ego of Julie Schumacher, a professor of creative writing and literature at the University of Minnesota. Schumacher uses humor, like the biting satire in her books, to deal with the atmosphere of higher education and the world in general.

“It is a time of great stress in higher education, what with rising tuition and student debt, an increase in adjunct rather than tenure-track faculty hires and, near and dear to my heart, a decline of support for the liberal arts,” Schumacher said in the keynote speech at the 2018 Phi Kappa Phi Biennial Convention in Minneapolis.

Higher education – and particularly English professors – are ripe for satire, Schumacher said. The seriousness of the academy practically begs for humor.

“You take a group of people who have been in school for twenty-five years, let’s say the last six or eight of them burrowed into some cell in the library, obsessively studying one particular, possibly arcane of their discipline, burrowing deeper and deeper, avoiding their friends, their hobbies, their social life,” she said. “And, if they are very fortunate, you give them a job and toss them into a department with other people who have also been obsessively avoiding their friends and family and studying an arcane subject and tell them to get along and govern themselves. It’s all these bitter, unsocialized people together in a department. It’s kind of made to make fun of.”

Schumacher uses humor to relieve the stress associated with the academy, in her teaching, and in her writing.

“I have to trick myself into a project,” she said, and she urges her students to also tackle their own projects with a sense of play. Schumacher wrote a series of young adult novels, and Dear Committee Members, while just playing with ideas about writing.

Her academic coloring book, Doodling for Academics: A Coloring and Activity Book, came about the same way. An editor from the University of Chicago Press, having read Jason Fitger’s adventures, reached out to Schumacher with the idea of a coloring book. Schumacher “has trouble drawing a stick figure,” she says, and it made no sense whatsoever, so she decided to do it.

“Comic and serious are not always opposites. They can actually be very friendly coworkers on a project with you,” Schumacher said.

She’s also very clear that even though Fitger often pokes fun (with a spear) at his students, she is clear that both Fitger and herself care deeply about their students.