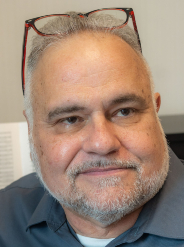 Initiated at Texas A&M University-Kingsville in 2016

Greg Sanders, Regents Professor of Music and coordinator of theory/composition studies at Texas A&M University-Kingsville, is the 2022-2024 Phi Kappa Phi Artist. Sanders received the award for his career accomplishments as a professor, musician and composer and his scholarly achievements.

In 2016, Sanders joined Phi Kappa Phi as a charter member of Chapter 332 at A&M-Kingsville and later served as the chapter president.

Born in 1957, his music has been called "powerful" by the New York Times and is in demand both in this country and abroad.  His music has been featured on National Public Radio, CBS' "Osgood File" and performed on almost every continent and in all 50 States.  In 2005 his composition “Elegy: Jesus Wept” was selected for inclusion in Thomas Dvorak’s Best Music for Young Bands. His music has been performed by national and international groups including the Indianapolis Symphony, Samara National Symphony (Russia), Boston Metropolitan Wind Symphony, Drum Corps International, University of Taipei (Taiwan), University of Melbourne, Royal Danish Marine Band and more, as well as over 1,100 universities and secondary school performances. His music is published by Keiser Southern Music, LarAsh Music, and TRN Music, and he is a member of Broadcast Music Incorporated.

"I have tried to create a distinct and diverse personal musical language that draws from many different musical styles and composition disciplines in my fifty-plus years of being a composer," said Sanders. "I have always found it immensely satisfying that my music is of interest to a broad spectrum of listeners of varying ages and musical backgrounds. To receive this honor from an organization that is such a diverse and inclusive organization as Phi Kappa Phi is undoubtedly a high point of my career and one that I will treasure."

Additional information about the composer and his music can be found at www.gregsanders.com.