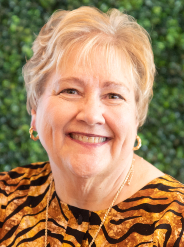 Initiated at The University of Southern Mississippi in 1994

Lynn Purnell Hagan, a licensed therapist and consultant, is the 2022-2024 recipient of the Phi Kappa Phi Ray Sylvester Distinguished Service Award. Hagan received the award for her outstanding dedication to service extending beyond academia.

Hagan, a native of Houston, Texas, received her bachelor’s degree at Texas A&M University. At the University of Southern Mississippi, she received a Master of Science in recreation, a Master of Social Work and was initiated into Phi Kappa Phi. She received her doctorate in psychology from California Southern University and has worked with survivors of trauma in a variety of settings for 25 years.

Much of Hagan's volunteer work has focused on social justice, equity and education for women and girls. Her work has spanned the globe and found her serving others from her home state of Texas to Kuwait.

As a result of her overseas trauma work, Col. William Brunold, staff chaplin of the 647th Area Support Group, said of her in his commendation “Lynn Hagan is to be highly commended for her selfless work in order to support servicemen and women deployed far away from their homes at a time of war.  Her efforts are a positive reflection upon her, her profession, and the citizens of the United States of America.”

Following the recognition of her work with children, women and girls, the 1996 Olympic Committee named her as a Community Hero, and she was selected to carry the Olympic flame through parts of Louisiana for the summer games in Atlanta.

Among her many honors, Hagan was the recipient of the 2010 Texas A&M Aggie Women Network’s Legacy Award, a Lifetime Achievement Award in Social Work from the National Association of Social Workers, and is a member of the University of Southern Mississippi's Alumni Hall of Fame.

"Having a lifetime of service, I am very proud to receive the Service Award," said Hagan. "Being recognized by such a prestigious organization, it brings such service to the forefront and serves as an inspiration to others to carry on and make having a servant heart something to which to be truly proud."