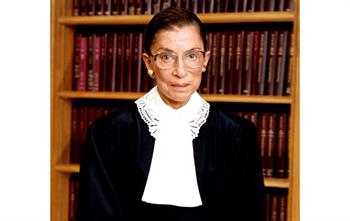 Ruth Bader Ginsburg (Cornell University), associate justice of the Supreme Court of the United States, died Sept. 18, 2020, of complications from metastatic pancreatic cancer. She was 87.

Ginsburg was inducted into The Honor Society of Phi Kappa Phi as a student at Cornell University. While there she met Martin D. Ginsburg, and they wed shortly after her graduation in 1954. The two moved to Fort Sill, Oklahoma, where she began working in a Social Security office. Their first child, Jane, was born in 1955.

Ruth followed Martin’s lead by joining him in law school at Harvard in 1956. There she was one of only nine women at the school. She once wrote, “When I attended Harvard Law School, there was no space in the dormitories for women; women were not admitted to faculty club dining tables; one could invite one’s father, but not one’s wife or mother, to the Law Review banquet; the old periodical room at Lamont Library was closed to women; law firms could use the school’s placement facilities though they would engage no women.”

Upon Martin’s graduation, he took a position with a law firm in New York, necessitating Ruth’s transfer to Columbia Law School. There she graduated as a Kent Scholar and tied for first in the class of 1959. The couple’s second child, James, was born in 1965.

Ruth Ginsburg’s career included serving as clerk to the Honorable Edmund Palmieri, Judge of the U.S. District Court for the Southern District of New York; working as a research associate and associate director of the Columbia Law School Project on International Procedure; teaching as a professor of law at Rutgers University School of Law and Columbia School of Law; and serving as the American Civil Liberties Union’s General Counsel. In 1980, she was appointed to the U.S. Court of Appeals for the District of Columbia Circuit by President Jimmy Carter. In 1993, she took the office of associate justice of the Supreme Court following a nomination by President Bill Clinton.

In 2009, Forbes named Ginsburg one of the world’s "100 Most Powerful Women," and in 2015, Time named her on of the "100 Most Influential People." In Time’s tribute, then-fellow Associate Justice Antonin Scalia shared, “her opinions are always thoroughly considered, always carefully crafted and almost always correct (which is to say we sometimes disagree). That much is apparent for all to see. What only her colleagues know is that her suggestions improve the opinions the rest of us write, and that she is a source of collegiality and good judgment in all our work.”

Ginsburg’s hobbies included opera, horseback riding, and golfing. According to the New York Times, a friend once remarked that Ginsburg, “who is left-handed but learned to play with right-handed clubs, played golf as she decided cases: aiming left, swinging right and hitting down the middle.”