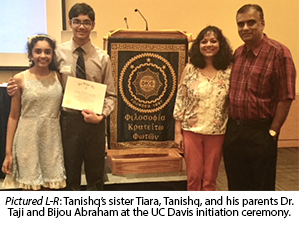 On Tuesday, May 8, the University of California, Davis chapter of Phi Kappa Phi initiated more than 240 students, including one of the youngest members to ever join the Society, 14-year-old Tanishq Abraham.

From a very early age, Tanishq, a native of Sacramento, was fascinated by all things science. It was this love of learning that he channeled into his education and began to excel in academics.

At the age of 7, Tanishq started taking college courses at American River College, a community college in his hometown, while concurrently completing his high school degree. By 11 years old, he had earned three associate’s degrees from the college and graduated at this top of his class. At 12 years old, Tanishq was accepted into UC Davis and began studies in biomedical engineering during the fall of 2016.

“Being passionate about medical and engineering fields, I decided I would pursue a multidisciplinary field like biomedical engineering for my undergraduate degree,” explained Tanishq.

With his credits earned from American River College, Tanishq started at UC Davis as a junior and began working as an undergraduate research intern in the university’s Biomedical Engineering Department.

Just like any college student, he experienced the challenges that can accompany coursework, exams, studying and more. It was evident, though, that his hard work paid off when he received his invitation to join Phi Kappa Phi this spring. But Tanishq will be the first to admit that it hasn’t always been easy.

“I had to overcome challenges during my seven years of college life, mainly because of my very young age,” said Tanishq. “Many people thought that there is no way a young child can do it so I had to prove to them over and over again. Just like most college students who work hard, I have worked hard also.”

In addition to his academic achievements, Tanishq presented a talk at the Lunar Science Forum hosted by NASA’s Ames Research Center at just 9 years old, making him the youngest participant in the conference’s history. He has also served as an invited speaker for the SXSW Interactive Conference and delivered two TED Talks.

Tanishq, who will graduate from UC Davis in June, is gearing up for the next phase of his academic career: the pursuit of a Ph.D. in biomedical engineering. In January of this year, Tanishq was accepted into the biomedical engineering graduate program at UC Davis and received the Deans’ Distinguished Graduate Fellowship, which guarantees five years of funding.

No matter what follows for Tanishq after graduate school, it’s certain he will continue to be an inspiration to students of all ages.

“In his passion to learn and reach his goals, he has inspired many around the world since he was 7 years old,” said Tanishq’s parents, Dr. Taji and Bijou Abraham.