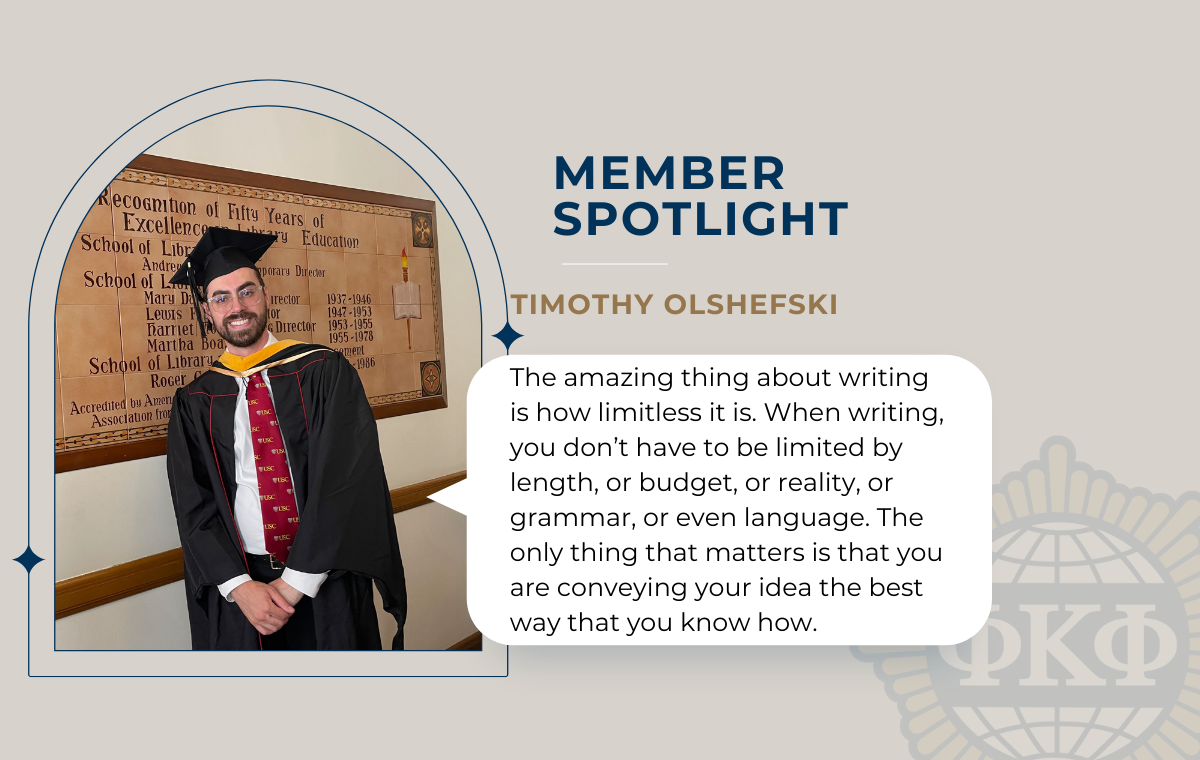 Amidst the start of the COVID-19 pandemic and welcoming his second child, Tim decided to leave Hollywood and enroll in the Master of Management in Library and Information Science program at the University of Southern California. It is there where he was initiated into Phi Kappa Phi. In 2021, Tim served as a Special Collections Intern at the USC Library, where he had the privilege to work with very rare historic items, including materials from exiled writers who fled Nazi Germany during WWII and settled in Los Angeles.

Let’s get to know Tim!

What does Phi Kappa Phi mean to you?

I was honored to be recognized for all the hard work I put into earning my MMLIS degree. With my wife’s boundless support, I raised our kids during the day and did almost all my graduate work on nights and weekends for two years during a global pandemic. I think a lot of us struggle with things like low self-esteem and imposter syndrome, but to me, Phi Kappa Phi is validation that my hard work paid off and that I have truly earned not just my grades but my place in my field.

Why did you choose your field of study?

Initially, I chose this field because I love to read and wanted to share that love with others. However, as I learned more about what librarians actually do, I realized how important they are during this time when misinformation and disinformation are so rampant. I want to do my part to promote intellectual freedom and information literacy.

What is your favorite TV series?

My favorite series of all time is Freaks and Geeks, but more recently, I finished the second season of Reservation Dogs, which is actually similar to Freaks and Geeks in many ways. Both shows depict the turbulent teen years in realistic ways while managing to be both hilarious and heartfelt at the same time.

What did you want to be when you grew up?

For a while I wanted to be a zookeeper. Even though I’m not currently pursuing a career right in the lions’ den, my curiosity for the world has not diminished!

Which superpower would you want to have?

I would choose the ability to clone myself. That way I could be with my kids as a stay-at-home dad, work, and have time for myself without having to sacrifice any of them.

What intrigues you most about writing?

The amazing thing about writing is how limitless it is. When writing, you don’t have to be limited by length, or budget, or reality, or grammar, or even language. The only thing that matters is that you are conveying your idea the best way that you know how.

What career accomplishment are you most proud of?

I am most proud of the two most significant pieces of writing I’ve ever produced. The first is the episode of television I wrote, from the sixth season of the show Nashville. Making that was such a collaborative process that it feels weird to even say that I wrote it, but I am happy with the way it turned out. The second is the independent research paper that I completed as part of my master’s program. This was a content analysis that explored how book bans disproportionately target and stifle diverse voices.

My heart belongs to the Pittsburgh Steelers, but since I’ve lived in Los Angeles for 13 years I have adopted the Dodgers. I don’t feel too bad about rooting for the Dodgers because the Pirates are, um, rebuilding. We love attending games, and since we live pretty close to Dodger Stadium we’re lucky to be able to go without dealing so much with the infamous LA traffic!

What’s the best piece of professional advice you’ve ever received?

This advice wasn’t given to me directly, but I learned it over the years and give it to others. Two things: Work hard, and don’t complain. It seems simple, and even though I felt like I was just doing the job, I have had so many bosses compliment me just because I did my job well without complaining, even when the tasks seemed tedious.

What travel destination has been your favorite?

I love traveling – experiencing new cultures, visiting interesting and historical sites. Some standouts for me include Rome, Shanghai, and Phnom Penh, but my favorite is probably spending our honeymoon in Paris and London. This was in the winter, and we counted down the seconds to the New Year with the crowd at the Eiffel Tower.

To learn more about Tim and connect, visit his profile within our online member community here.

Is there someone you would like to see in the spotlight? Send your nomination to engagement@phikappaphi.org, and include background information for the nomination. 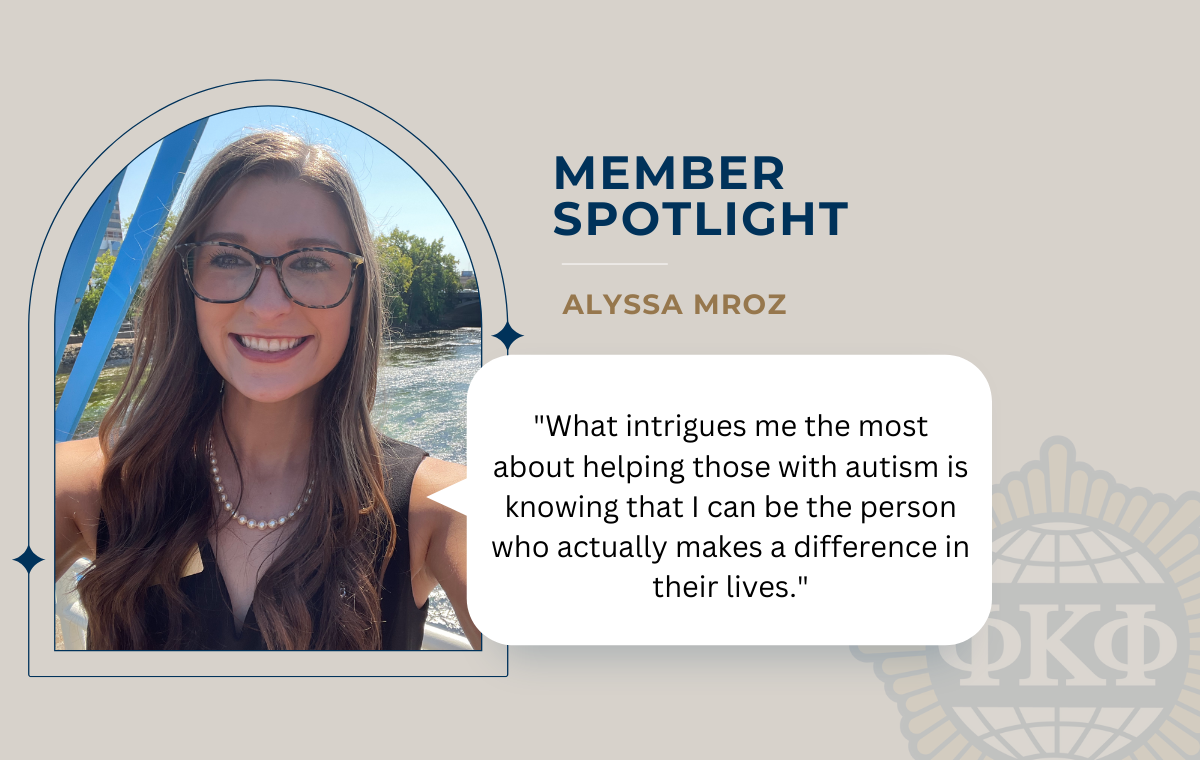 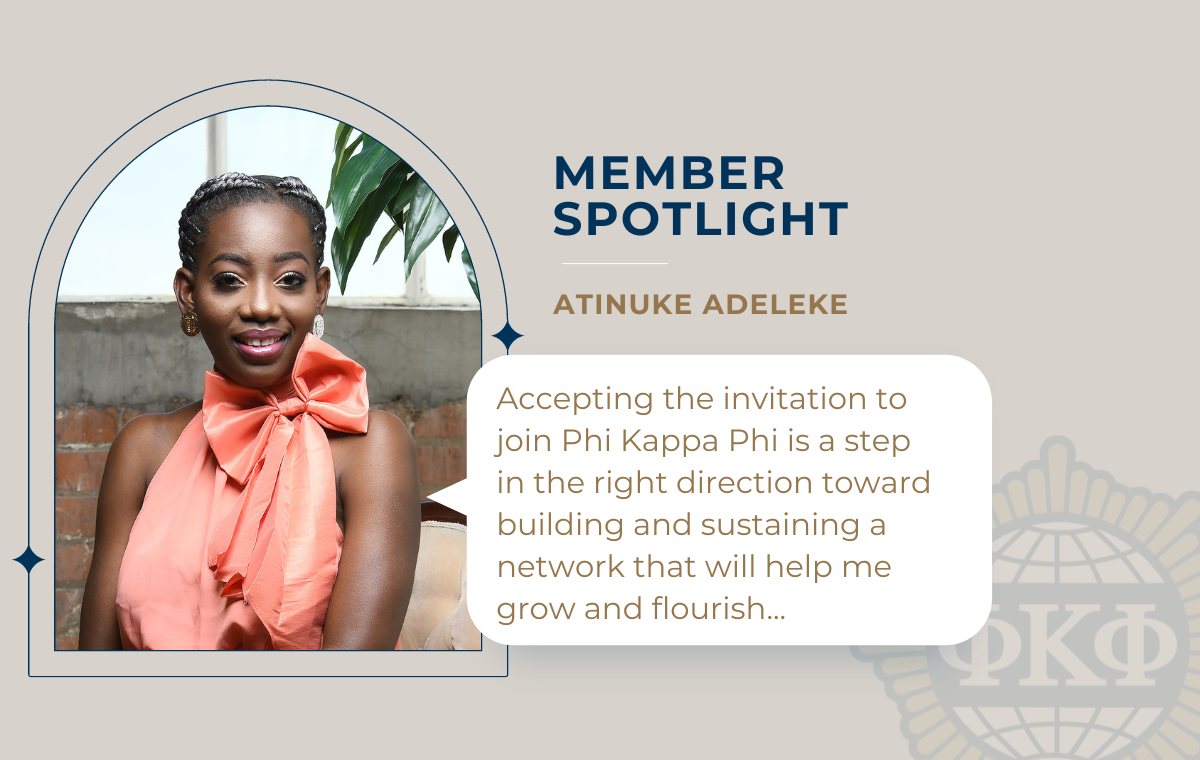 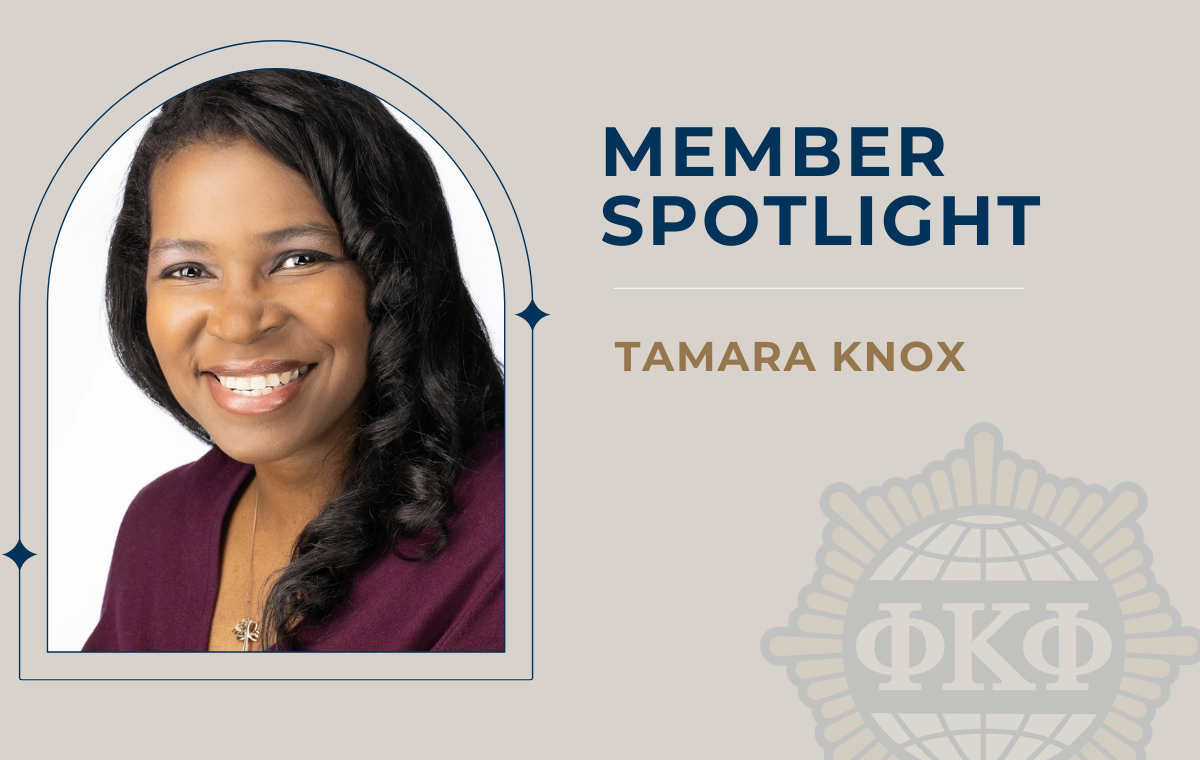