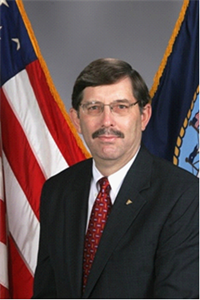 Robert (Rob) Gates was initiated at Virginia Tech in 2003 while pursuing a Ph.D. in public administration. Rob also holds a Bachelor of Science degree in physics from the Virginia Military Institute, a Master of Arts degree in political science from Virginia Tech and a Master of Engineering degree in engineering science from Pennsylvania State University. He is also a distinguished graduate of the U.S. Naval War College.

Currently retired, Rob worked for many years as a physicist and executive in the U.S. Navy laboratory system. He was also an adjunct professor at the University of Mary Washington and the U.S. Naval War College. He enjoys serving groups that promote STEM education and the preservation of the history of Navy laboratories. He is the President of the Rappahannock Community College Educational Foundation board and Vice-President of the Dahlgren Heritage Foundation.

Get to know Rob!


Getting married, the birth of our son, and having a paper published in a refereed history journal are the personal highlights. There are numerous professional highlights as well. Being selected for the Navy Senior Executive Service, completing my Ph.D., and being invited to join Phi Kappa Phi are at the top of that list.

To learn more about Rob and connect, visit his member profile within the Phi Kappa Phi online community here.

The ΦΚΦ Member Spotlight gives members the opportunity to share more about themselves and how they have benefited from membership in the Society. The spotlight is a great way for members to learn about each other and connect with others who have common interests and goals.

Would you like to be featured, or is there someone you would like see in the spotlight? If so, email Jamie Chapman, membership director, at jchapman@phikappaphi.org. Be sure to include basic information for the nomination.