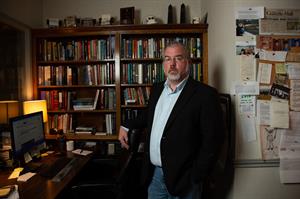 Phi Kappa Phi member Ken Ward Jr., investigative journalist, has been named as a 2018 MacArthur Fellow. He is one of 25 fellows named to the 2018 class.

A staff writer at the Charleston Gazette-Mail for more than 25 years, Ward received the fellowship for his reporting and in-depth coverage of the coal, chemical and natural gas industries in West Virginia. Ward’s investigative journalism was commended for “revealing the human and environmental toll of natural resource extraction in West Virginia and spurring greater accountability among public and private stakeholders,” according to the MacArthur Foundation.

Throughout his career, Ward has boldly reported on the economic, social and health impacts of worker safety violations, environmental hazards and corporate malfeasance within West Virginia’s natural resource and chemical industries. He has covered several incidents in the state including the 2006 Sago Mine disaster and 2014 Elk River chemical spill. His reporting on the decades-long government inaction around black lung disease eventually led to new regulations being implemented by the Mine Safety and Health Administration.

“Part of the job of a journalist, and the kind of journalism that I want to do, is to expose those kinds of difficult truths so that people can try to confront them and deal with them,” he said in a video by the MacArthur Foundation.

Ward received his bachelor’s degree from West Virginia University where he was initiated as a Phi Kappa Phi member. He is a member of Investigative Reporters and Editors and the Society of Environmental Journalists and, in 2017, was named a member of the newly launched ProPublica Local Reporting Network.

Also known as the Genius Grant, the MacArthur Fellowship celebrates individuals who have shown “extraordinary originality and dedication in their creative pursuits and a marked capacity for self-direction.” The fellows, who span the disciplines, receive a no-strings-attached grant of $625,000 over five years.