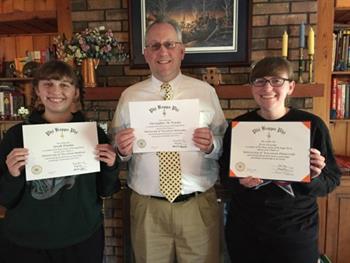 It’s no secret that Phi Kappa Phi members have a lot in common between academic excellence and a commitment to service. But for three new members in Wisconsin, their bond goes beyond a love of learning.

When Sarah Prusha received her invitation to join Phi Kappa Phi at the University of Wisconsin–Madison this spring, her dad, Chris, and younger sister, Erin, were thrilled for her and also unsurprised. Sarah had recently graduated from UW–Madison in December 2017 with a Bachelor of Arts in psychology and a criminal justice certificate in just two and a half years.

“I was very happy when I received my invitation to Phi Kappa Phi,” said Sarah. “I know how prestigious the honor society is, and I am honored to be a part of it.”

What happened next came as a welcome surprise to the family when Erin, a junior studying chemistry and forensic investigation at the University of Wisconsin–Platteville, also received an invitation to join.

“I was surprised and honored to be selected to join Phi Kappa Phi,” said Erin. “I was familiar with it, because my sister had already received her invitation, but I was not expecting to receive my own.”

The two sisters, attending different institutions, were delighted to share the honor together and were to be initiated in April, just two weeks apart. Their father, Chris, was also excited. “I was one proud father on hearing the news from both of them,” he said.

What the Prushas didn’t know, however, was that they would soon have to schedule another initiation ceremony on the family calendar.

Within a week of Erin receiving her invitation to join, Chris also received an invitation from the University of Wisconsin–Milwaukee. Currently pursuing a master’s degree in administrative leadership, Chris was both proud and overjoyed to become a member alongside his two daughters.

Over the span of two and a half weeks, Sarah, Erin and Chris were each initiated into their respective Phi Kappa Phi chapters—a cause for celebration, of course, for the entire Prusha family.

“Earning a college education has always been important to me and my family, and it feels wonderful for all of us to be honored for our hard work and dedication,” said Erin.