Dan Sandweiss, Society president, is a professor of anthropology and quaternary and climate studies at the University of Maine, where he was Dean and Associate Provost for Graduate Studies from 2005-2014. He was previously a post-doc at the Carnegie Museum of Natural History and a director of the Túcume Archaeological Project in Peru.

President of The Honor Society of Phi Kappa Phi for the 2020-2022 biennium, Sandweiss has been active in the Society since 2006 at the local, regional and national levels. Beginning in chapter leadership at the Society's founding chapter at the University of Maine, Sandweiss has served as the chapter's vice president, president-elect, president, and past president. On a national level, he served as the Northeast Regional Vice President during the 2014-2016 biennium, as Vice President for Chapter Development from 2016-2018, and as President-Elect from 2018-2020.

Sandweiss received his bachelor's degree in archaeology from Yale University and his master's degree and Ph.D. in anthropology from Cornell University.

To request Dr. Sandweiss as a speaker at your event, please complete this form. 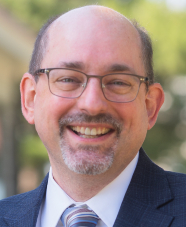 Bradley Newcomer assumed stewardship of The Honor Society of Phi Kappa Phi in January 2022 as its 12th executive director. He was initiated into the Society at the University of Alabama at Birmingham in 2012.

Newcomer previously served at James Madison University where he directed the process of establishing the Honors College. Under his leadership, the College’s enrollment grew almost 60 percent and was recognized by the Fulbright Program as a Top Producer of Fulbright U.S. Students for consecutive years.

Prior to his time at JMU, Newcomer served at UAB in a variety of positions.

As executive director and CEO, Newcomer works with the Society’s board of directors to develop a strategic plan for Phi Kappa Phi that supports its mission “to recognize and promote academic excellence in all fields of higher education and to engage the community of scholars in service to others.” He also oversees the day-to-day operations of the Phi Kappa Phi national office and participates in field activities such as campus visits and chapter installations.

Newcomer earned a bachelor of science in physics from Juniata College, a master of physics and Ph.D. in biomedical sciences from Wright State University and a master of business administration from UAB.

To request Dr. Newcomer as a speaker at your event, please complete this form.