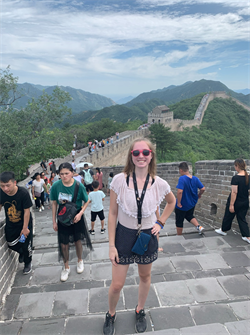 It’s been 12 years since the program at WMU welcomed its first former foster children to campus.

“Our focus in the early years was on success, but in small and targeted increments,” said Ronicka D. Hamilton, director of the program. “When our first student graduated, our focus shifted to ensure that our programming was comprehensively preparing students not only to earn their degrees, but successfully transition to the next ‘thing,’ such as grad school or a career.”

J. Gabriel Ware, a Seita program student, spoke to Phi Kappa Phi’s 2018 convention, where he, Hamilton, and WMU President Edward Montgomery accepted the Society’s Excellence in Innovation Award. There, he talked about the difficulties he faced in the foster system as a child.

His girlfriend, now his wife, first talked to him about going to college. She was looking at master’s degree programs at Western Michigan.

“This is a great program, and I’m proud to be part of it. I hope that it continues forever,” Ware said. He’s now a member of the ABC News research and news gathering team for World News Tonight and Good Morning America.

“The national and prestigious recognition by Phi Kappa Phi has shined the spotlight on our program in a new way,” Hamilton said. “Our affiliation with Phi Kappa Phi has given us academic credibility, which we add to our street-level credibility that is earned by the reputation we have among youth residing in foster care and professionals supporting them.”

Now that the program as more than 160 graduates under its belt, they’re looking to the future.

“Going forward, we aim to grow the program’s endowments, improve our graduation rates, and expand our coach training team to train others around the country,” shared Hamilton. “In addition, we will continue research efforts to discover better ways to best support the population of college students with a history in foster care.”

“It might be because the study abroad trips and experiences give students something very exciting to look forward to,” Hamilton said. “They are also life-changing experiences.”

Some of the Excellence and Innovation’s $100,000 award went to fund those study abroad experiences, as well as emergency costs for some of the Seita Scholars, like medical costs, car repairs and books.

To learn more about the Excellence in Innovation Award or to apply, visit http://www.phikappaphi.org/innovation.

Photo provided by Western Michigan University – Angela Toutant is one of eight Seita Scholar Program students who has participated in a study abroad trip.