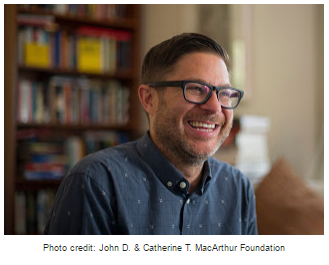 Phi Kappa Phi member Josh Kun, professor of communication at University of Southern California, has been named a 2016 MacArthur Fellow. He is one of 23 fellows named to the 2016 class.

A cultural historian, Kun received the award for his work studying the cultural intersection of art and popular culture. Much of this research focuses on the histories of both music and food with emphasis on their communities of origin.

“I’m interested in what music tells us about the past, how it helps us survive the present, and how it can help people imagine new futures,” Kun said in a video released by the MacArthur Foundation.

To go a step further, Kun makes it a point to take his research beyond the classroom and into the cultures he studies.

Most recently, he hosted a series of events in Los Angeles, which included readings, concerts, and even a live mixtape recording.

“I think that this fellowship is going to help me a great deal to be more selective in the projects that I choose. And to have the luxury—and it is a deep, deep luxury—to be able to pursue the things that I love,” Kun said.

Kun has served as a curator for a number of venues including the Getty Foundation, the Museum of Latin American Art, the Skirball Center, and the Grammy Museum. He also co-founded the Idelsohn Society for Musical Preservation, a nonprofit focused on the study of Jewish history through to music.
Also known as the Genius Grant, the MacArthur Fellowship celebrates individuals who have shown “extraordinary originality and dedication in their creative pursuits and a marked capacity for self-direction.” The fellows, who span the disciplines, receive a no-strings-attached grant of $625,000 over five years.
When autocomplete results are available use up and down arrows to review and enter to select.