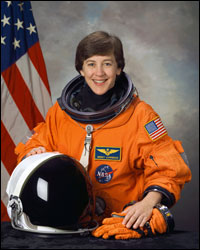 It’s National Astronaut Day and the 59th anniversary of the first American in space. On May 5, 1961, Alan Shepard Jr. was launched into space aboard the Freedom 7 space capsule. His 15-minute flight was the beginning of a program that continues today.

To mark the occasion, we’ve compiled some of our favorite space related Phi Kappa Phi tidbits. Let’s see which ones you know!

How many Phi Kappa Phi members have traveled into space?
Answer: 30
James McDivitt, who was initiated at University of Michigan in 1959, was the first Society member in space. Most recently, Christina Koch, initiated at North Carolina State University, returned from her time aboard the International Space Station in February. Click here to see the full list of Phi Kappa Phi astronauts.

What’s the largest number of people in space at one time?
Answer: 13
On July 17, 2009, when the Space Shuttle Endeavour docked at the International Space Station, a combined total of 13 people were on board. Society member Timothy Kopra, from the United States Military Academy, was there for the event. It was the third time 13 people have been in space.

What’s the largest number of Society members in space at one time?
Answer: 3
On March 14, 1995, a record-breaking total of 13 people were in space at one time. They were aboard the Space Shuttle Endeavour, the Mir space station, and the Soyuz TM21. Flying high on the Space Shuttle were three Society members – Samuel Durrance, initiated at California State University, Los Angeles; Wendy Lawrence, United States Naval Academy; and Ronald Parise, Youngstown State University.

Who holds the record for longest time spent in space by a woman?
Answer: Christina Koch
After spending 328 days in space, Koch returned to earth on Feb. 6, 2020. Koch was initiated into Phi Kappa Phi at North Carolina State University.

Can American astronauts vote from space?
Answer: Yes!
Some astronauts have found themselves in the unique position of not being on Earth for both regular voting and early/absentee voting for an election. Because NASA’s spaceflight program is centered in Houston, most astronauts have a Texas address. Therefore, Texas passed unique-to-its-state legislation giving astronauts the opportunity to vote from space. Several space-farers have taken advantage of the process including Society member Gregory Chamitoff, of Cal Poly State University, San Luis Obispo, who voted from space in 2008.

Photo provided by NASA – Retired astronaut Wendy Lawrence currently serves as a member of the Phi Kappa Phi Foundation Board of Trustees.