This month’s Chapter Update highlights three academic programs completed by chapters in Florida, Nevada, and the Philippines. Two of the programs took place during the inaugural Phi Kappa Phi Week.

Chapter 308 at the Florida Institute of Technology in Melbourne, Florida, hosted a lecture called “Animal Talks!” on Feb. 7.

The high-energy evening featured distinguished members of the faculty who gave TED-style talks about animals. A local group, the Space Coast Little Big Band, played jazz throughout the night.

The event included five talks that focused on faculty research including the impact of light and darkness on animal behavior, sharks and the myths and realities of a shark attack, what nonhuman primates can teach us about human evolution, how plants are social organisms that communicate through chemical signals, and lastly, how animal venoms can impact human functionality and be used to develop new drugs to improve function without causing any major side-effects.

The chapter promoted the event at a table in the union every day during Phi Kappa Phi Week. They also passed out Valentine’s Day candy to encourage students to stop by and chat. Members spoke to approximately 40 students who visited the table in the student union. In addition to flyers and emails, Chapter Public Relations Officer Jared Campbell spoke to the local radio station to promote the event to the community. Some honors and biology faculty offered extra credit to their students who attended. More than 125 people participated, and the chapter also streamed the program live on YouTube and posted the recording to their Facebook page. 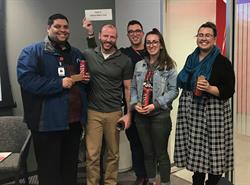 Chapter 100 at the University of Nevada, Las Vegas, partnered with the UNLV Graduate College, Honors College, and Office of Undergraduate Research, to host a Quiz Bowl on Feb. 4.

The Quiz Bowl included seven rounds with approximately 10 questions per round. Since Phi Kappa Phi recognizes students from all disciplines, the chapter used questions from a variety of topics including history, literature, science, current events, popular culture and sports.

The competition was emceed by Sean Clark, chapter president. Eleven teams and 51 participants took part in the event. Teams were allowed to make up their own names and were required to have three to five students, alumni, faculty or staff. The winning team won a gift card and UNLV tumbler.

UP Hosts Lecture of Excellence

Chapter 45 at the University of the Philippines hosted their first Lecture of Excellence for the year on Jan. 29. 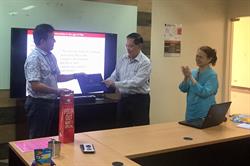 The lecture was presented by Dr. Fidel R. Nemenzo, a Phi Kappa Phi member, who was recently elected to serve as the Chancellor at the Diliman campus. Nemenzo teaches math and focuses on number theory, elliptic curves and coding theory.

Phi Kappa Phi members, students, faculty, staff and alumni learned about the Fourth Industrial Revolution and how this era impacts the trends and challenges at the university. After the lecture, attendees were able to participate in an open forum discussion.