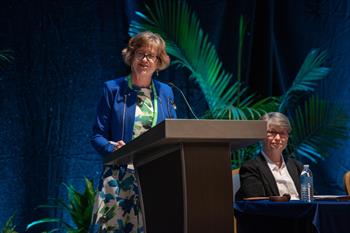 Gypsy Denzine addressed the convention for the last time as president before turning over the office to Missy Hopper.

“My aha moment for the past two years is this simple … I learned history matters.”

Denzine says it wasn’t obvious to her, as she likes to live and think in the future.

But a spate of speaking requests from the chapter at the University of Nevada at Las Vegas, celebrating their fiftieth anniversary, and from the Society’s original chapter at the University of Maine turned Denzine to the unexplored contours of the past. Marcus Urann, founder of Phi Kappa Phi, was a student with a good idea for an inclusive honor society. And Abram Winegardner Harris, president of the university, opened the door.

“Just like Marcus did, in 1897, I hope we all knock on someone’s door if we have a good idea. Second, I encourage all of us, if somebody knocks on our door, let’s open the door,” Denzine said. “President Harris wasn’t too busy, he opened the door. He took that time to open the door.”

She also encouraged membership in associations and asked members to think about what it means to be part of Phi Kappa Phi.

“I suggest it means more than academic excellence. I suggest it does mean inclusivity, as Marcus had hoped for,” Denzine said. “As a society, our history does matter. We are living history right now, so we can be proud to be part of our milestone in our history. I’m proud to say … we are in great shape. Our future looks great, way beyond ten years from now.”