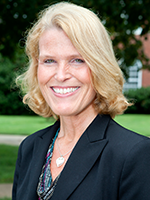 Years of Service to the Chapter: 2 years

How did you become involved as a chapter officer? My leadership service with Phi Kappa Phi began at Austin Peay State University, Chapter 191, where I served as the public relations officer. The chapter there did outstanding projects, and I loved being a part of the leadership team.

When I decided to join the faculty at Murray State University in August 2013, I wanted to continue serving Phi Kappa Phi in a leadership capacity. I knew Chapter 302 was rather young, and I felt I could help the chapter grow. I contacted a couple of the officers on record, and the rest is history. I enjoyed serving Murray State's chapter as secretary for the last two years. I am now vice president, and I look forward to working with the chapter's fantastic officers and members.

What does Phi Kappa Phi mean to you? When I received my invitation during my doctoral work in 2010, I knew that Phi Kappa Phi was a top honor society and was thrilled to join. Recently, I became a lifetime member. I simply enjoy working on Phi Kappa Phi programs and activities that will benefit our students and members.

It's no secret with my friends and colleagues at several universities that I am a big Phi Kappa Phi advocate. It's all over my social media accounts, and I wear my pin often. Here's a sidebar to that effect: On April 30, 2015, I was inducted as a special initiate into a Phi Alpha Theta history honor society chapter at another university because of the help I have given to the chapter over the years. I was talking with the chapter adviser (a dear friend of mine) and purchasing some Phi Alpha Theta items from her. She said that I could buy this and that, "but I know Phi Kappa Phi is your thing." Although I bought a Phi Alpha Theta stole to wear under my Phi Kappa Phi stole, she was right; I love being a member of Phi Kappa Phi.

What do you enjoy most about being a chapter officer? I love working with all the officers, especially the student vice presidents. They have such great energy and a strong work ethic. Plus, knowing that I am helping our chapter to grow on campus and in the community is rewarding.

What advice would you give to a new chapter officer? No. 1: Wear your Phi Kappa Phi pin often with pride. This way, it becomes a good conversation piece. No. 2: Although your chapter might have a public relations officer, all officers share in the task of promoting the chapter. For instance, help to take photos when possible and share announcements with your public relations officer. No. 3: Meet and communicate regularly as a chapter.

What are your hobbies? Running. I run four to five times a week. I have ran almost every distance, from a 5K to an ultramarathon 50K (31.5 miles). For now, I am competitive only in the 5K races, but one day, I want to train to run a 50-miler and then a 100-miler.

Where are you from? I was raised in Hopkinsville, Kentucky. After graduating from Western Kentucky University in 1993, I returned to Hopkinsville and lived there until 2008, when I moved to Benton, Kentucky. I then moved to Clarksville, Tennessee, just minutes from the Kentucky border, in 2010 and returned to west Kentucky in late 2014.